Written by Chris Miles
Updated over a week ago

On a recent afternoon, the CrowdTangle team received this message from Louie Villalobos, who runs the social media team for the Arizona Republic:

“My social reporter at AZCentral.com in Phoenix reported this story after I spotted it through CrowdTangle. We were the first to report on [it] and the story went viral across the globe … All from a scanning session on CrowdTangle.”

Talk about a #win. As of early August the story, about an Army veteran’s dying wish, has surpassed 220,000 page views, according to Louie. 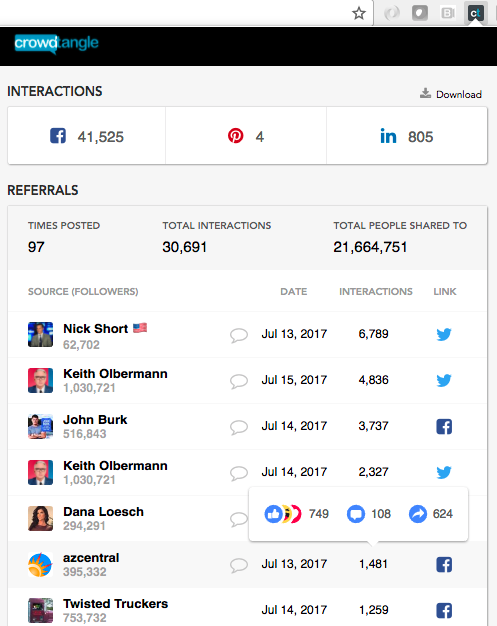 A look at CrowdTangle’s Chrome Extension shares for the Arizona Republic story.

“That traffic is 79% social and includes 192k unique visitors. The CrowdTangle Chrome Extension tells me that it was shared to more than 19 million people across various Facebook, Twitter, and Reddit pages (the total followers of these pages combined),” Louie says.

“To say it’s a metrics success for us is a massive understatement.

“And that is just our URL,” Louie continued. “I can’t imagine what the USA TODAY version did in traffic.”

The story was cross-posted to usatoday.com, part of the wider USA TODAY NETWORK family which the Arizona Republic is part of, where it notched over 41,000 more Facebook shares, and was shared to over 41 million more people, according to CrowdTangle’s Chrome Extension.

“We use CrowdTangle every day across the USA TODAY Network to track how we’re doing on social, see what interesting stories are being shared, and look for new ideas, just like this success story out of Arizona. Social listening is a key part of our strategy and CrowdTangle is an important tool that helps us listen to and engage with our audiences across the country, and create work that we know will resonate,” says Mary Nahorniak, deputy managing editor for digital at USA TODAY.

So how did Louie and his team use CrowdTangle to find this story?

Louie and his team have created their own CrowdTangle dashboards, where they can experiment with content discovery in custom Lists and Saved Searches. “I spend a considerable amount of time combing through Facebook, Reddit, and Twitter for story ideas,” Louie says.

One of CrowdTangle’s List features allows you to track not just pages on Facebook, but also public groups. He came across a Facebook post in one of these public groups asking for text messages for a dying veteran. The post was just beginning to overperform in CrowdTangle’s algorithm when Louie saw it toward the end of a late-night scanning session. He had been exploring different terms including the terms “Arizona,” “Phoenix,” and “veterans.”

Metrics outline how the Arizona Republic story overperformed, according to CrowdTangle.

“So I reached out to the group’s admin that night to get the ball rolling. I realized early on that nobody else was reporting this,” Louie says. “After a couple days of verifying what we could, we posted the story on a Thursday evening. It had gone viral by Saturday morning. Like viral, viral.”

The story made impact.

“The veteran had to eventually shut his phone down. They received more than 100k text messages in three days and he was given several quality of life donations as media outlets all over the world picked up on the story.”

Success for Louie revolved around hyper-detailed search criteria. “My biggest tip for CrowdTangle is that you need to be consistent and detailed. I have also begun filtering by underperforming for certain terms to hopefully reveal some hidden gems,” he says.

“Also, don’t sleep on the viral alerts,” Louie adds, highlighting CrowdTangle’s viral alert system. “Being able to run [viral alerts] through both email and Slack is a great thing. It took me almost a month of tweaking the settings but I think I’ve finally found good footing on what kind of alerts are helpful.”

CrowdTangle allows users to set up a range of different viral alerts, which are sent via email or Slack when a post overperforms. These alerts can be customized based on specific Lists or Saved Search keywords, and can also zero in on video-specific, most shared, or image-centric content.

Louie explains that CrowdTangle can be both “a mirror to your own content while being a sort of metal detector for discovering content.”

“We have social champions and reporters scouring CrowdTangle at all times of the day to help find stories our readers can connect to,” Louie adds.

“A couple reporters, for example, are filtering for local content. My social reporter, though, is branching out to national and international stories because we know that regions don’t matter if a story is interesting enough by itself.”

“I would suggest that CrowdTangle can be an incredibly powerful tool for gauging your audience. I poured through our July Facebook posts and can now tell you what thematically underperformed/overperformed. More importantly, I can tell you what kind of content we might have under or over shared. Pairing that with our in-house metric tools can potentially help us fine tune our feeds.”

“I can’t stress enough how much information CrowdTangle can give social managers. Being able to compare our results to other outlets, for example, really helps us gain a sense of place. Being able to critically look at how our posts perform and what our audience interacts with has been a game changer. It is essentially a real-time metric tool that helps you create accountability for the job your social team is doing. That is invaluable,” he says.