M
Written by Michelle Poon
Updated over a week ago

Live Nation is the world’s largest live entertainment company that, beyond global touring deals and festival performances, offers services such as management, business marketing and consulting to artists across all genres, including comedy.

Joshua Boland-Burrell works in comedy promotion for Live Nation, and felt there was a need for more data-based information about how comedians can best utilize their social presence to engage fans and sell tickets to shows - so, he took to CrowdTangle to study comedians’ content, see what was working and not working, and build best practices off of that research. He collaborated with Facebook’s own Public Figures team to develop a programme around this work - The Comedy Performance Programme - that would work with artists while testing out his insights.

We connected with Joshua to hear more about what he learned and how he used CrowdTangle in the project, so others working with public figures can learn from his methods:

What inspired this project?

There is a lot of stand-up comedy on Facebook and Instagram, and most comics rely on their social media channels as their strongest tool to engage with their fans and sell tickets for their live shows. Despite this, there has not been much research done specifically for comedians on social media.

How did you go about building best practices for comedians utilizing CrowdTangle data?

By creating a list of 1500+ comedians’ pages we were able to use CrowdTangle to compare overperforming and underperforming posts. When you put that many pages into a CrowdTangle list, you begin to see patterns in what works and what does not. Once we knew what worked, we began to adapt it and apply it to our comedians’ content strategies, modifying our paid ads campaigns and advising comedians on their approach to organic growth.

What were your findings?

The main findings for comedians were around the use of video content, which regularly overperforms on the platforms.

As seen above, most of the interactions on Facebook posts from Live Nation’s pre-curated List of over 2,000 comedians happened on their video posts, in contrast to a broader range of celebrities, who saw the most interactions on photo posts.

While the expected avenues for engagement and growth—i.e, posts about life events, politics, good news, career developments, etc—for public figures are consistent for comedians, comedians who regularly upload stand-up to Facebook and Instagram see a faster rate of growth compared to other performers. 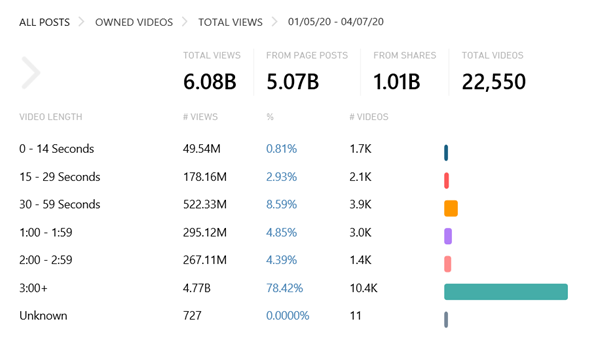 Live Nation’s sample of comedians also notably saw the highest average views per video on videos that were at least 3+ minutes, as compared to a broader range of celebrities which had more even viewership distribution amongst video lengths.

From there we found overwhelming evidence of the effectiveness of using stand up in a meme format. Placing engaging copy in the black bars above and below a comedy clip serves as an introduction for the bit and can often offer that initial recognition for a user that compels them to watch a comedian who they potentially don’t know.

Have you or your teams been able to utilize your findings in their work so far? If so, how? Have you seen any results?

The findings have already been shared with our comedy promoters across the world, and, as such, inform both our ad practices and the content strategies of the artists we work with. The artists who have taken part in this project have all seen their following on Facebook at least double over a three-month period.

Do you have any tips for other partners hoping to use data to define their own best practices?

Dig in. Even with 1500+ pages, it took several months of testing creative before we were seeing the optimal level of engagement and growth for each of our acts involved in the project. Use Facebook’s A/B Testing and campaign budget optimisation to test creative. One of the things that we realised is that we were not always necessarily the barometer of the public, and the videos that we thought would go viral would not always be the ones to catch the public’s attention.