Written by Robin Jill Monheit
Updated over a week ago

Note- before creating your own Lists be sure to look through the Explore Section of each of your Dashboards.  CrowdTangle may have already created the List for you!

This is a part of the Election Strategy Series

Why Would I Use This?

How Do I Do This?

Note- before you create your own Election-themed Lists, be sure to look in the Explore Section for each of your Dashboards to see if these Lists have already been created for you!

Comprehensive election coverage is going to involve a mix of Lists and Searches, but at the core you're going to want at least two things for each election:

Read below to learn how to set these up and also for some advanced strategies:

Primary sources are the Pages and Accounts of the actual candidates, politicians, and their staffers.  Typically this will include some combination of their Facebook Pages/Profiles and/or Instagram Accounts.

Step 1: In each of your Facebook and Instagram dashboards create an election-themed List that includes the official Pages/Accounts of each of the candidates and incumbent politicians who are running in a particular race.

Step 3: Combine these Post Stream columns into one multi-platform column to give you a single view of all of their accounts.

Step 4: Set the column to Hot- which will show you posts that are starting to overperform, prioritizing the most recent first.  This is a great way for you to see what's trending as soon as it starts trending.

Step 5 (optional): Repeat Steps 1-4 and set the new Post Stream column to Most Interactions (to see what is getting the most traction) or Most Recent (to see posts as soon as they come out).

Secondary sources are the ones that talk about the election/politicians/candidates but which aren't actually a part of the campaigns.  These can include local and national publications, political Facebook Groups, political influencers, political parties, etc.

This kind of coverage can come in a lot of forms, but you'll start by setting up an election-themed Saved Search:

Step 3: Go to the Post tab and check the posts in the stream to be sure you're pulling in the coverage you're looking for.  If you're pulling in posts that are unrelated to the election, modify your Search terms as needed.

Tip: If you want to identify new secondary sources to track, use the Saved Search Leaderboard feature to see which Pages, Accounts, or subreddits are showing up in your Search.  Also consider creating a Facebook Group Saved Search and using the Leaderboard to identify active public groups that are discussing the election you're tracking

Saved Searches can also be set up to look within specifics Pages, Accounts, or subreddits via the "Search Within" option: 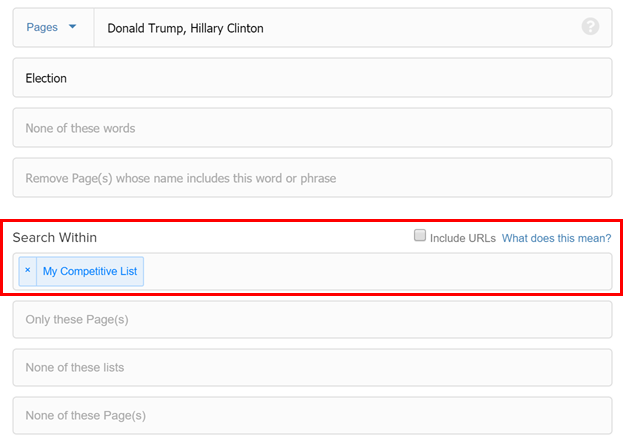 Try the following variations to make your coverage of the election more sophisticated:

Step 2: Re-create the Election-themed Saved Search from above, but this time add the competitive List to the "Search Within Only These Lists" field.  This will let you compare your coverage of the election to that of your competitors.

It's important to be able to track the election coverage by certain Local and/or National publications, but these publications are often covering a lot of other issues as well.  You can set up your Saved Searches to specifically hone in on only their coverage of the election

Step 1: Create a List in each of your Dashboards of the Pages and Accounts of the specific local and/or national publications you want to track.  (You may or may not want to include your own depending on your needs)

Step 2: Re-create the Election-themed Saved Searches from above, but this time add this List of specific publications to the "Search Within Only These Lists" field.  This will let you see their coverage of this specific election without having to filter through all of their other posts.

Similar to the issue above, there may be political influencers and political Facebook Groups who sometimes- but not always- comment on/post about the election you're trying to cover.  You can set up your Saved Searches to filter out any unrelated posts.

Step 1: Create a List in each of your Dashboards of the Pages and Accounts of specific political influencers and also of public political Facebook Groups.

Step 2: Re-create the Election-themed Saved Searches from above, but this time add the Lists of these influencers and Groups to the "Search Within Only These Lists" field.  This will filter out any posts from these sources that aren't related to the election you're covering.

Getting A Local Take on Local and National Elections:

Reddit can be a powerful way to connect with the local take on both local and national elections.  Here's how to leverage it:

Step 1: Create a List of local-themed subreddits in your Reddit dashboard.  (You can search by the name of the local area in the "Add subreddits" field).

Step 2: Re-Create the Election-themed Saved Search from above in your Reddit dashboard, but this time add your new Local subreddit List in the "Search Within Only These Lists" field.  This will give you a view of the local discussions of these elections.

Next Up: Election Coverage Analytics